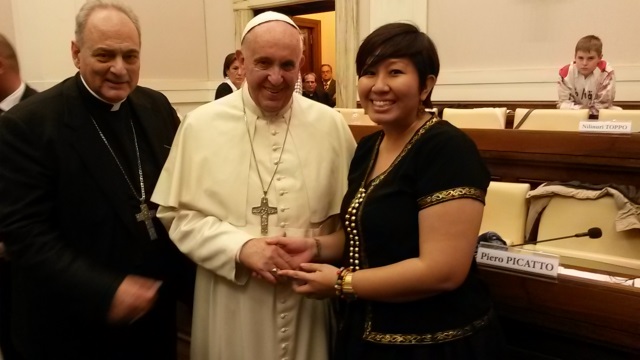 Sixty young people from various faiths around the world, from countries including Sweden, Kenya, Albania, Cambodia and Mexico came together for the Youth Symposium on Prostitution and Human Trafficking from 14 to 16 November 2014 at Casina Pio IV, Vatican. The event was organised by the Pontifical Academy of Sciences, the interfaith Global Freedom Network and Vinculos en Red, an anti-trafficking NGO based in Argentina. Good Shepherd was represented by Joseph Loh, a volunteer of the Good Shepherd Foundation in Taiwan and Anne Baltazar from Good Shepherd Malaysia.

The symposium was a three-day event which started with a welcoming dinner for all the participants on Friday 14 November. In his welcome speech Monsignor Marcelo Sorondo, the Chancellor of the Pontifical Academy of Sciences said that there is a 'globalization of Indifference' and encouraged all of us to 'teach others and help them to understand that human trafficking exists'. A total of thirty one papers were presented at the symposium. Among the presenters were survivors of human trafficking, enforcers, lawyers, shelter service providers and those who are working in prevention.

Highlight of the programme

The highlight of the programme was the powerful and moving sharing by survivors who were trafficked either for sex or labour. One of the participants who was sexually exploited for 4 years recalls, 'We were not given any rest at all, I got pregnant at the age of 15, and I was forced to work until I was 8 months pregnant with twins'. She is now an activist against human trafficking and reunited with one of her twins. The survivors also emphasized that much of their healing was because of the care and support of the social workers.

We were very blessed and excited on the third day to be able to meet Pope Francis. He spoke about the human mentality which considers another human being as 'an object that ends up as material goods which is thrown away'. He also added that 'Life only has meaning if we are willing to risk it, to use it for the good of others'. He ended by saying how pleased he was at 'seeing many young people who want to commit themselves' in the fight 'to recover the dignity' of people who are trafficked. After the address – to our delight - we were all given the chance to greet the Pope individually.

In summary, it was a very inspiring and eye-opening programme to hear about the global fight against human trafficking from young people. I was able to have a bigger picture of the situation of human trafficking, learn and network with others. I felt very proud that Good Shepherd is also playing its part in this important issue and even prouder that together with Joseph, we represented the Good Shepherd Mission. Echoing the call of Pope Francis and the new congregational direction of Good Shepherd, 'Energised by the Spirit, we risk together for mission', let us together risk to ensure that human trafficking will soon be history.