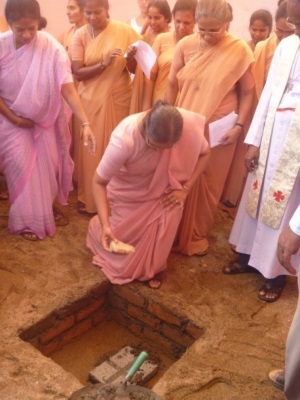 Laying foundations of compassion and tenderness

15th September, 2014 was a red letter day for the Sisters of the Good Shepherd of the Province of Central East India/Nepal, as we laid the foundation stone for our Provincialate building, Anukampa Nivas (House of Compassion and Tenderness).

The foundation stone is blessed and laid

The Archbishop, His Grace Abraham Viruthakulangara blessed and laid the foundation stone in the presence of the Sisters from the Province of South West India and the Sisters of this Province who had gathered in Nagpur for a 4 day Training Programme on Mission Development.

The ceremony was simple, yet solemn and inclusive. After the welcome and introductions the Blessing Prayer was said followed by the Laying of the Foundation Stone.

The Bishop laid the foundation stone and the Priests from the two parishes Frs. Joe Quadros of St. Martin de Porres and Fr. Navneet Kujur St. Pius X, to which the sisters belong, cemented the same.

A special stone from 'the Indian Mother House'

Then the Province Leader of the South West India Province Sr. Bridget Paily laid a stone which they had carried all the way from Bangalore and her Councillors Srs. Lissy Chacko, Therese Meera Mathew, Shalini Podimattam, put the cement around it. The Bangalore House is the first one in India and we call it the Indian Mother House.

The Province Leader of our Province, Sr. Sabina Pathrose laid a Time Capsule (a bottle) in the pit for posterity, some medals of our Foundress St. Mary Euphrasia and our Founder St. John Eudes and some saints and a stone from Nepal. The time capsule contains the front page of the newspaper of the day, 15th September, 2014, together with the invitation and the entire ceremony. Two of her Councillors Srs. Aruna George and Pushpa Louis, who were present and the Province Treasurer Sr. Deanna Pereira made sure the Time Capsule was secure with cement.

Three Temporary Professed sisters, Srs. Madhavi Balusupati, Aruna Ekka and Mamatha Shanthi Mucchhu laid a brick and the 4 Pre Novices Kavitha Jakki, Sujatha Salluri, Anusha Mekala and Jenifa Pellavendra Raja and cemented it. These above are the future of the Province and Congregation. The Engineer-Consultant Mr. Benjamin John and the Contractor Mr. Biju Joseph laid a brick and the Supervisors and workers secured it.

The Archbishop then blessed everyone present and prayed for the success of the project.

It was a very meaningful ceremony well appreciated by everyone for the innovation and creativity.