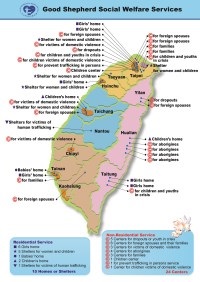 In Taipei, Taiwan girls were being sold into prostitution and the Bishop invited Sisters of the Good Shepherd to help run a half-way home that the Catholic Church had started, to provide shelter for the girls.

In 1987 women’s groups in Taiwan used media to condemn this selling of young girls into prostitution. It is important to understand that Taiwan at that time was only beginning to have an inclusive social welfare system.  Needs of vulnerable people: those with disability, aged people and others were not being met and effort was moving along to meet other needs. However nobody could predict that girls would be sold into prostitution, nor that women’s groups would be so vocal, courageously using media to condemn this practice. The general public was very concerned.

What did the Sisters do?

When Good Shepherd Sisters came in 1987 and offered their experience of working with girls in need in other parts of the world, Government, Church authorities, women’s groups, and those who know of this work were very supportive and welcomed the sisters.

In their work with the victims the sisters discovered that there were three trends: sold, tricked and voluntarily choosing prostitution. The following stories show examples of girls in these situations:

The first resident in our half-way home was sold at the age of 11 years. Her mother had a disability, could not care for her or protect her, and she did not know who her natural father was. Her maternal grandmother disliked girls and slapped her each time she saw her. At 9 years old she dropped out of school and at 11 her grandmother and uncle asked her to sign the contract that sold her for NT$800,000 ($US26,000) for life for prostitution to her adoptive mother who was a pimp. She was rescued at 14 years of age. For these girls, the Government had a remand home where they could stay for 6 months. During these 6 months those who needed further shelter and residential care came to our half way home. Later we sheltered women who had suffered incest, rape, abuse.

Aborigines were protected during martial law as visitors had to have a permit to go to their settlements. But after martial law, men and women would come mostly at night and offer high school girls the opportunity to earn money during summer holidays or weekends. Marie was 14 in Form 1, a happy child, bubbling with life. She was delighted that she could go to Taipei, the capital city of Taiwan, to serve tea and get NT$10,000 ($US323) a month for 2 months. She had seen Taipei on TV and believed that her dream had come true. She could actually go to Taipei.  For a young aboriginal girl NT$10,000 was a fortune. However after she was rescued, the trauma she had experienced was debilitating.

Girls who went voluntarily into prostitution were detained in the youth detention centre. When Good Shepherd Sister Therese Thong worked with these girls, a 16 year old shared her reason why she was detained. She was the oldest of 5 and the youngest was not yet one year old. Her father physically abused her mother extremely badly. The mother ran away. The father left with another woman, no one paid the rent and the children dispersed. They went to look for food and lodging, someone offered her the job to be a prostitute. She accepted as it meant a roof over her head and food. When she was “caught”, girls in this situation who went into prostitution voluntarily were detained in the youth detention centre.  This was where she met Sister Therese.

The sisters believe that this work is important for a number of reasons.  Noticing an increase in the number of young girls who voluntarily engaged in the sex trade, Good Shepherd perceived a distortion in the life values in many young people, particularly in situations where their families did not provide healthy role modelling.

Therefore Good Shepherd started to serve street youths, high-risk children and youth. They also set up Learning Centres for Dropouts to prevent drugs, single pregnancies and delinquent behaviour. The sisters felt that these young people needed an acceptable place they could call their own. Happily in 1995 Taipei City Social Welfare offered Good Shepherd an outreach centre for children and youth in crisis and this work developed and grew down the years.

In working with them, the sisters realized that many girls came from families with domestic violence: their mothers left home because of unbearable abuse, these girls suffered incest or were sold into brothels by their fathers. From then on Good Shepherd felt the need to help mothers first before helping girls. The Government provided the building and entrusted the sisters to run this shelter and later placement services for women and their children in crisis. At the same time other problems were discovered within these families, and Good Shepherd began to help children who suffered from domestic violence or who were witnesses of domestic violence. Good Shepherd accepts single mothers, provides adoption services as well as services for single parent families.

In providing shelter services Good Shepherd found that the victims of foreign spouses were increasing rapidly around 2003. In running activities in the remote area the sisters received information describing the high rate of premature birth of foreign spouses, and that often their children were ashamed of their foreign mothers. Sister Therese went to visit the head of Social Welfare Department of Kaohsiung County, the biggest county in southern Taiwan, and the head admitted that problems were serious. So Good Shepherd started to provide community services for foreign spouses and their families.

In the shelter it became clear that some foreign women came to Taiwan in the name of marriage, but in reality it was human trafficking. Good Shepherd started to hold public hearings, provide prevention and protection, through media, education, and advocacy to raise public awareness and promote international regional cooperation to prevent human trafficking.

Click here to read about the important restructure implemented in 2015 -

Who is the major target group?

Who benefits and how do they benefit?

In the beginning:  the girls sold into prostitution.  Later, in every service area.

How many people are assisted

How is the programme evaluated?

1. Improving service guidance in each centre.

6. Building partnership based on co-responsibilities

How does it contribute to the UN Sustainable Development Goals?

After school child care for children of disadvantaged families.

Programme for children with developmental challenges.

Activities to stop violence against women and children.

A big change we are experiencing now is the changing of leadership from a Sister to lay Mission Partners. This is the beginning of a new era.  It has been a challenge to transfer leadership from a traditional trained sister with 58 years of experience in the work, able to be 24 hours on duty and take any work asked of her, to a mission partner with family commitments who needs to work appropriate hours.

This transfer of leadership calls everyone:  the incoming leader himself, board members, the sisters, and partners to reflect further and deeper on the mission.  There needs to be acknowledgment of everyone’s limitations, the seeking and using of expert advice, and the willingness to work together as a team, for the sake of the Mission.

What would make the project more effective?

Today the works of Good Shepherd have more and more challenges, new situations arise and more people need help. The role of partners is vital in social services. Good Shepherd leadership must be open to see the aim of the mission, the need of the services, and to call upon the expertise others have.  Exercising authority and responsibility in a collegial way is essential.