Launch of Talitha Kum, in Taiwan 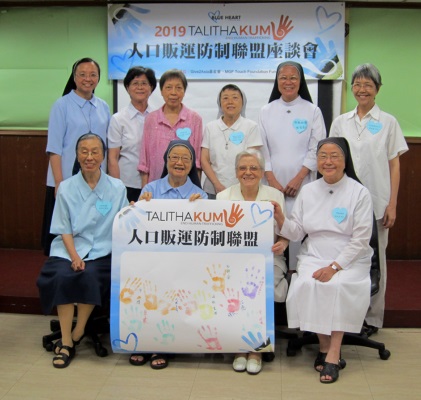 Working together for good

Acknowledgment of article below in China Times, 7/30, (author: Ling-Liang-Qi)

On July 30, 2019 the 10 Catholic sisters' organizations in Taiwan participated in the forum "Talitha Kum-Human Trafficking Prevention Alliance" in Taipei. July 30 was also The World Day against Human Trafficking. Sisters representing each of the ten Catholic organizations signed a poster on a wall with their hands at the event, symbolizing the launch of preparation of the Talitha Kum-Taiwan Alliance. In the future, the Alliance members will use the Catholic organizations' power to connect cross-border human trafficking prevention networks for promoting human trafficking prevention in Taiwan.

Talitha Kum is a Catholic international network that is against human trafficking and was founded by the International Union of Superiors General (UISG) Rome in 2009. It has global service bases in over 77 countries. The network is composed of about 2,000 Catholic sisters, staff members, church members and volunteers. Talitha Kum also facilitates collaboration and the exchange of information regarding human trafficking, and reinforces the already existing activities against trafficking undertaken by the service bases in the five continents.

Besides demonstrating international work of Talitha Kum, the Good Shepherd Social Welfare Foundation, which has been rescuing victims of child prostitution since 1987, also shared its experience of dealing with the rescue and protection of victims of human trafficking with the sisters and all guests during the forum.

Tang Jing-Lian (Sr Therese Thong), the executive director of the Good Shepherd Social Welfare Foundation, said that people suffering from war, persecution and poverty have been forced to move to other countries through immigration and migration, but transnational criminal organizations have taken the opportunity to exploit such people during their time of need through illegal labor and sexual exploitation. The illegal activities such as the child trafficking and the illegal sale of organs have made human trafficking the biggest challenge for international humanitarian rescue workers.

Director Tang Jing-Lian also said that in the age of the Internet, if families and communities do not raise young people's awareness of human trafficking by education, they will easily become victims themselves because of emotional needs, such as becoming emotionally involved with someone who lives in another country and wanting to go see them, or the desire to work in a foreign country, which opens up such young individuals to the possibility of being exploited by the previously mentioned transnational criminal organization.  Talitha Kum, an international network against human trafficking, is educating those young people through the church system, and making an attempt to help end human trafficking through joint initiatives, which focuses on prevention as well as providing social rehabilitation, shelter, counselling and legal assistance to such victims.

Other Catholic groups represented in the photo include the Missionary Dominican Rosary sisters, Caritas Taiwan, Franciscan Missionaries of Mary, Missionaries of Sacro Costato, Sisters of Social Service, Daughters of Jesus.