Support for survivors of bombings, in Sri Lanka 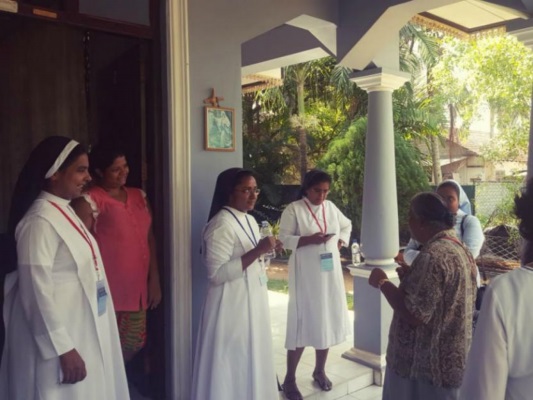 Reaching out to survivors

People in Sri Lanka whose lives were most affected by the Easter Sunday attacks remain in need of spiritual, psychological and practical support.  Good Shepherd Sisters are among more than 200 sisters of different Congregations invited by the Conference of Major Religious Superiors of Sri Lanka to provide ongoing pastoral support for survivors of the tragedy.  This story is based on article by Thomas Scaria, in Global Sisters Report - A Project of National Catholic Reporter (USA) July 1, 2019

[Thomas Scaria is a senior journalist based in India who has worked in Sri Lanka until recently in an inter-governmental organization. He has written for UCA News since 1991 and received its 2000 Best Reporter award. He also writes for Matters India, a news portal that focuses on religious and social issues and collaborates with GSR.]

St Sebastian’s Parish Church, Negombo, was one of the worst hit locations. Negombo is known for its high Catholic population and is sometimes known as ‘the Rome of the East’. Normally, all family members attend Mass together, sitting on the same bench, and therefore members from the same family died together.

In the period immediately following the bombing, the Archdiocese of Colombo's social service wing, Caritas Sri Lanka-SEDEC (Social and Economic Development Center) took the lead in providing hospitalization, food and other material supports.

Good Shepherd Sisters Dinalika Perera and Laksmi Fernando are among teams of volunteers who are divided into groups of two sisters, one priest and two lay people for an initial round of visits. The initial teams were mostly Catholics, but later some Buddhists joined them.

The teams visit the survivors in three stages:

Each team was allotted a certain number of families for ongoing support. Cardinal Malcolm Ranjith, archbishop of Colombo, asked the volunteers to continue to support the people for at least three months.

In most situations, team members provide a listening ear to the people they visit.  As most Catholic women religious congregations have members trained in psychology and counselling, they may also make psychological assessments of family members.  Team members have found many people suffering from guilt because they could not help others as they fled the scene. Depression, sleeplessness, nightmares, phobia and suicidal tendencies are some symptoms noticed in the survivors.  The teams give families a checklist to detect possible symptoms of imbalances among their members. They also give referral numbers to contact for services.

These ongoing services are assisting the people of Negombo to slowly regain a sense of normalcy.

Friends in Harmony Orchestra produced an inspirational and stirring message of unity as a tribute to the people, and to the nation of Sri Lanka.

Video - A Tribute to our Nation, Friends of Harmony Orchestra