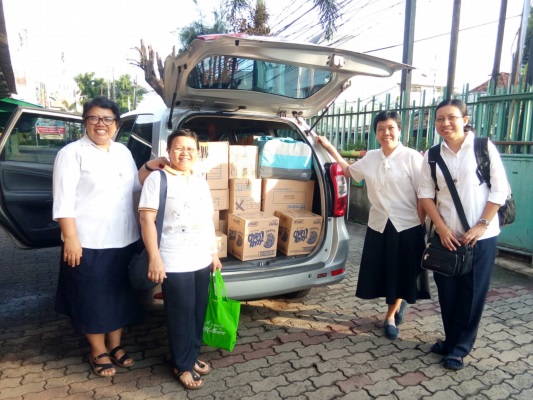 Impact of Tsunami in Sunda Strait

Good Shepherd Sisters of Indonesia along with other Indonesian people and institutions were moved by the calamity of the Tsunami at Sunda Strait on 22 December 2018.  The tsunami struck coastal areas around the Sunda Strait between the island of Sumatra and Java on that Saturday night. The victims and damage occurred across four affected districts, namely in the Pandeglang, Serang, South Lampung and Tanggamus regencies. It stated that 437 people had died, 10 were missing, 9.061 injured and 16.198 became IDPs (Internally displaced persons).  More than 170 houses and buildings were damaged.

Participating in a common response

In Pandeglang Sr Agatha, representing Good Shepherd Sisters joined with the Emergency Response Team consisting of organizations including Rangkas Bitung Mission, Lembaga Daya Dharma (Social Apostolate of Jakarta Archdiocese), Kevinlo Jakarta and PERDHAKI. Our mission was to bring the Good Shepherd’s love to the people in their sufferings.  We brought rice, noodles, cooking oil, biscuits and clothes and hygienic kits.  As a team we provided several kinds of services such as public kitchen, medical service, and psychosocial activities as trauma healing. We served around 600 people in Angsana Village.  The Sisters joined this team from 26 to 30 December 2018.

In Kalianda, South Lampung district, Good Shepherd Sisters Agatha and Theresia Anita joined with Caritas of Tanjung Karang Diocese, Kalianda parishioners, a Sister of HK (Sacred Heart), a FSGM Sister (Franciscan Sister) and YPKS - a Social Service Foundation run by Tanjung Karang Diocese. They were there from 5 to 6 January 2019. They delivered medicines, biscuits and money to the team.  As a team of the Catholic Church they provided 700 packs of rice and side dishes for breakfast to be distributed to 500 IDPs at an Indoor tennis court, 200 injured victims and their families at the local Government Hospital of Kalianda. The team also provided psychosocial services to children. It was planned also to provide medical services. The team focused upon giving relief to the victims through emergency response while introducing or letting people know the presence of Catholics in Kalianda.

We thank you to our sisters from South Korea, and Singapore-Malaysia who supported us with their funds and enabled us to be in solidarity with the victims and survivors of tsunami in Pandeglang and Kalianda.

Sisters and a volunteer in front of the Kalianda Retreat House, one of the disaster posts for tsunami victims and survivors.

Agatha and Theresia preparing to leave.

Agatha and Theresia, with a Sister of the Sacred Heart Congregation walk in the tsunami affected area in Lampung.

Sisters and women in Lampung preparing food for survivors.

Volunteers preparing food for the victims and survivors.