Interfaith Dialogue - a source of peace 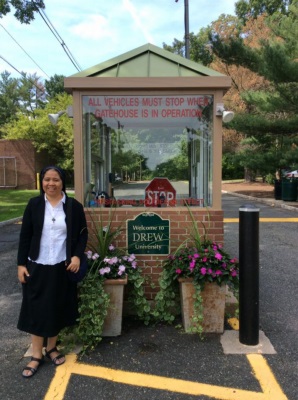 Sister Flora Nirmala from the Province of Indonesia was nominated by Drew University, New Jersey, USA to participate in a three week course on Interfaith Dialogue at its Center on Religion, Culture and Conflict.  Participants were from different countries and nationalities: Indonesia, Pakistan, Egypt, Palestine and Israel. The focus of the conference was the three major religions:  Christianity, Judaism, Islam.  Flora shares her reflections about challenges and opportunities of Interfaith Dialogue in the Asian context.

The course on Inter-religious Dialogue has helped me understand the three different major religions (Islam, Judaism and Christianity) especially those that I did not know before. Based on our discussion regarding Inter-religious or Interfaith Dialogue, I want to reflect more about challenges and opportunities in the Asian context. Thinking of the inter-religious or interfaith dialogue in the Asian context emphasizes that Asia is a specific continent with abundant wealth of religious pluralism, culture and tradition. There are many differences, which certainly cannot be denied, and these differences can also be sources of big issues and conflict. However, there can also be opportunities for dialogue and enrichment.

The challenges of pluralism

Three weeks of living and interacting with participants from different countries gave me some understanding of conflict in human life particularly this reality of religious pluralism. It provides some significant insights and ideas on how to build dialogue among religions. In the context of Asia, where there is religious pluralism, the best starting point is dialogue with Islam, Judaism, Hinduism, Buddhism and among Christians. These questions will be a guide to the real actions where the dialogue finds its important place among pluralism. Thus, pluralism is the challenge for mission but at the same time it will be an expectation to find the presence of God in multi-religious. This gives many challenges and opportunities to exchange and to know people of different religion and traditions.

Dialogue implies a personal encounter, a meeting face to face, where the aim is not to change the other partner in the dialogue. The main point of a dialogue is to build relationship with others. In the context of multi-religious dimension, this can be understood as a sign of God’s presence. It means 'all positive and constructive inter-religious relations with individuals and communities of other belief which are directed at mutual understanding and enrichment' are to be done in obedience to truth and respect for freedom. It should, as a motivation, include both witness and the exploration of respective religious convictions.

Why is inter-religious dialogue significant?

Our mission in Asia where there is religious pluralism goes beyond its own people. Religions are rooted in the deepest heart of Asian people. Religion is both a personal matter and at the same time involves a whole community of people. Religion becomes a way to the heart of people. It offers us clues into the social aspects of a people’s way of life. The context of Asia pluralism assures all religious that religion is the way to find God in real situation. For example, Catholics in Indonesia are known as one of the minority groups in the country.  To understand other religions in everyday life it is important to have inter-faith dialogue. Indonesia’s motto 'Unity in Diversity'(Bhinneka Tunggal Ika) can be a source of interfaith dialogue. It’s an urgent call for me personally and for all the nation.

The challenge now is how to approach inter-religious dialogue in the pluralistic situation of Indonesia? How to approach Asian countries as a global community, where all people hold multi-religious dimensions, so that we can live together in harmony and peace.

Beginning with dialogue of life

The problem for each religion is when we begin our dialogue with a spirituality approach or dialogue of theological exchange. It is difficult to begin to dialogue when both are not ready or even they do not know each other. The dialogue should begin with dialogue of life. The reality of religious pluralism calls for people to be more inclusive, open and respectful. The dialogue can be a way to promote peace. It is true that in the context of inter-religious dialogue, every religion should be able to find God in the universal values or common good. So that we can live together in harmony and peace. Indeed, inter-religious dialogue becomes the sign of God’s presence.

Accepting one another in diversity

Therefore, religious plurality should be inclusive. It proclaims a new way to encounter God in the different faith and religion. The 'new way' of dialogue is the way forward, for the 'old way' only promotes exclusivity. The new way offers a new paradigm that promises a circumstance for living in harmony with one another. In Asian countries, for instance like Indonesia, real situations of people in various religions urge us to promote the inter-religious dialogue. This way is more welcoming, more inclusive and pluralist. One important thing to always remember is to accept one another in diversity. The Indonesian motto: 'unity in diversity' (Bhinneka Tunggal Ika) captures well the spirit of inter-religious dialogue.