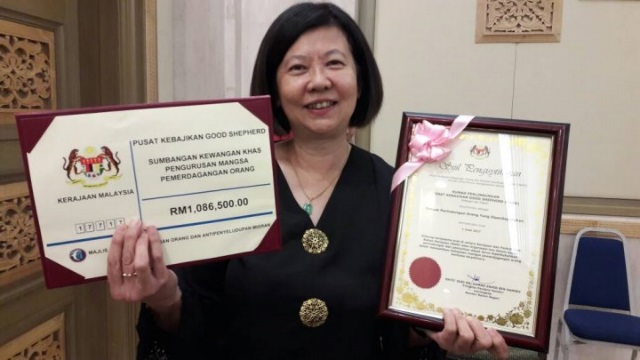 Working with the government in pioneer project

Good Shepherd in Malaysia has made significant inroads into the government machinery in combatting human trafficking in the country.  It has been a long road in tactful diplomacy and much of the effort has been made by Ms Poh Choo (Executive Director) and Ms Karen Tai (Advocacy Officer).

Photo above:  Ms Chin Poh Choo with certificates of appointment

A.  Appointment of Good Shepherd staff as Protection Officers

After many years of engagement with the government on issues of trafficking, the Malaysian government has come to recognise the roles that NGOs can play in the fight against human trafficking.

The first significant step in the collaboration was the election of NGO staff as Protection Officers for victims of trafficking.

A total of 12 protection officers from 6 NGOs were appointed to participate in this program.  PKGS had the highest representative of five persons.   PKGS staff who were appointed: Dionetta David, Mag Chin Yoke Yin and Teo Kar Im (for Kuala Lumpur-Selangor) and Petra Poh Mei Ling and Maria Binti Masilang (for Sabah state).

How does it work?

At present, the main focus of the protection officers (PO) is to assist the government-run women shelters in some of the case management work.   In addition, the POs are required to accompany the women to court or hospital, especially in the event the government shelters are short-handed or in the event of an emergency.

This is a first for the Government of Malaysia and a major step in the government-NGOs collaboration to combat human trafficking.  We are proud and excited to be part of this initiative as it takes us one step further into influencing the State to take on a more active approach in victim assistance and protection.

B.    Appointment of PKGS as a Shelter Provider

On 17 July, 2017 Chin Poh Choo, the Executive Director of PKGS was invited to Putrajaya for a formal presentation of PKGS's appointment as a shelter provider of trafficked victims by the Government of Malaysia.

The pioneer project with the Government provides protection in the form of transitional shelters for trafficked women who previously were sheltered only in State-run shelters.  PKGS will operate two transitional shelters, one each in Kuala Lumpur and Kota Kinabalu. The shelters commenced operation on 1 August, 2017.

Ahmad Zahid, the Deputy Prime Minister of Malaysia said in his press conference: “The government sees the involvement of NGOs in the management of human trafficking victims as a positive development and should be continued to ensure the welfare of victims ..."

Poh Choo reiterated the same message in her speech that "... government-NGO collaboration is an affirmative step towards the government’s delivery effort for improved quality of care services and the wellbeing of trafficked women. We are keen to also facilitate the implementation of the freedom of movement and employment which will allow survivors to restore their livelihood and regain better control of their lives. More importantly, this will contribute to their healing process and the restoration of their dignity as persons."

Use of Good Shepherd regional networks will be important

The PKGS shelters will also provide assistance to trafficked survivors to safe repatriation and reintegration into their communities through the Good Shepherd networks in the region.

This historic step in collaboration marks an important milestone as PKGS

moves towards making more significant contribution to fulfil the objectives of

the National Action Plan on Anti-Trafficking of Persons.

Story and photos of the blessing of KPGS shelter

This article gives a small glimpse of the vast perils and occasional small victories of the human spirit told through stories.