Launch of social enterprise - 'Everything Pineapple' 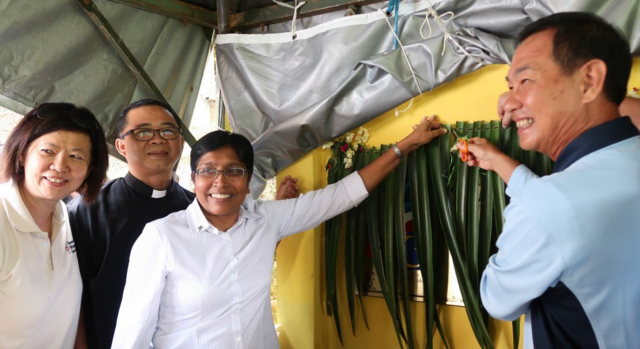 No Mountain too high....

On 5th June 2015, a couple of Good Shepherd Sisters felt the ground beneath their feet shake as they sat down for breakfast. While they were used to mild rumblings as heavy vehicles past the Convent in Likas, Sabah, they were alarmed on that morning. One of them who had served in the Philippines where earthquakes were more common, cried out 'Earthquake!' and ran out of the building. They later learnt that a 6.0-magnitude earthquake had strike Mount Kinabalu, which at 4,092 meters, is South East Asia’s highest peak.  Among the 18 people who died in that tragic 30-second quake were 7 students, 2 teachers and an expedition guide from Singapore.

The small nation set aside a National Day of Remembrance as she mourned the loss of its citizens, most of them 12 years old. In the village of Kiau Nuluh in Kota Belud, the community mourned for local mountain guide, Robert Sappingi, fondly known as Robbi, who reportedly lost his life while rescuing a tourist.

Impact upon the community

Most of the men in Kiau Nuluh work as guides and porters contributing about 70% to household income, so when the mountain was closed after the earthquake the community faced economic hardships. The women who cultivated pineapple were afraid to return to their plots in the face of daily tremors and landslides.

In August 2015, in line with Good Shepherd Congregational Direction on Economic Justice, Good Shepherd Services (GSS) gingerly embarked on an inaugural community-based socioeconomic project with the women to produce pineapple chutney and pineapple jam. The recipes were contributed by volunteers, who also made the arduous and sometimes dangerous fortnightly trips with staff to Kiau Nuluh to supervise the production.

The project was aptly named, “Everything Pineapple”. Besides providing emotional, psychological and business strategy support, GSS helped to market and sell the products in Kota Kinabalu, mostly to parishioners of St Simon Church.

Fast forward to 24 April 2017.  Staff and volunteers of GSS Sabah, the leadership team from the Province of Singapore/ Malaysia and other well-wishers gathered with the women of Koonduan Kiau Nuluh Enterprise (KKNE) for a Thanksgiving Service to mark the opening of their newly built pineapple product processing center, Sunduan Pisompuruan. The cost of building the 2-storey center, with a built-up area of 2,000 square feet was sponsored by Sabah Credit Corporation.

KKNE grew from an initial membership of 11 women to 49 at the time of opening and there are plans to incorporate another 11 from the waiting list by July 2017. The product list has also grown to include pineapple juice and pineapple chutney with anchovies. As the women are empowered to develop KKNE, their creativity and business acumen have blossomed.  With the addition of new technology in the bottling and canning process, shelf life is extended from one month to one year. There are talks about expanding to markets overseas, so watch out for KKNE products on a supermarket shelf near you!

There was palpable rejoicing in Kiau Nuluh as we celebrated Foundress Day - Feast day of St Mary Euphrasia - with prayers, songs, and dances, topped off by the sharing of delicious food contributed by the villagers and volunteers. You’ve guessed it; pineapple featured prominently.

Acknowledgment of Embrace the World - A journal of congregational justice issues prepared by GSIJPO.  #27 June 2017