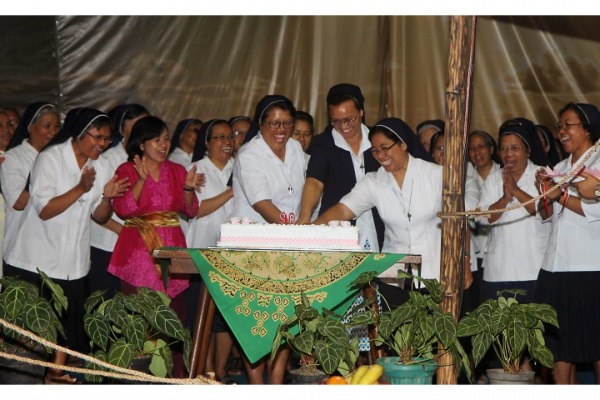 Seeds have grown and borne fruit

With great joy and gratitude the Province of Indonesia celebrated ninety years of Good Shepherd mission on 27 April, 2017.

Mission partners, sisters and lay, planned various activities to mark the anniversary. We welcomed with joy and gratitude Sr Zelna Oosthuizen (Congregational Leadership Team, Apostolic Councillor) whose visit coincided with the 90th anniversary celebrations. Sr Zelna visited several communities in Indonesia and engaged in dialogue with mission partners. Her presence was a special blessing for all mission partners during the festivities.

Process of Review and Planning

The Province Leadership Team held a session from 24-27 April, 2017 to review the realities of the Indonesia Province during the past three years and plan for the next three years. Sr Zelna attended the session along with thirty-eight sisters and nine lay mission partners representing each community. Fr Agustinus Purnomo, MSF, facilitated the session. This group searched for new ways to organize the mission in order to be more effective and relevant and to bring about positive impact on everyone and be a blessing for many.

On the feast of St Mary Euphrasia, April 24, 2017, we were happy and grateful to celebrate the silver jubilee of Sr Magdalena, RGS, and the golden jubilee of Sr Immaculata Retno, RGS.

The celebration continued with a thanksgiving Eucharist presided by ten priests with the main presider, Monsignor Ignatius Suharyo. In his homily, Monsignor Suharyo described how to be a prophet today. To be a prophet means to experience oneness with God, to have one heart and feeling with God, and to truly understand the Heart of God. Furthermore, a prophet is never outdated. A prophet has intelligence of the mind, intelligence of the heart, as well as the spiritual and emotional intelligence to be able to read the signs of the times.

The thanksgiving celebration concluded with a presentation by the students of Santa Maria Fatima School in movement and song depicting the ninety year journey of Good Shepherd mission in Indonesia. The students also performed cultural dances from several regions of Indonesia that added vibrancy and excitement to the atmosphere. The gathering was a special moment and experience of being Good Shepherd family.

The symbol of the tree

The Good Shepherd tree planted in Indonesia is already ninety years old. The tree has grown and become bigger.

A future filled with hope

May the spiritual wealth we have received throughout the ninety years – a firm faith, a burning zeal, the totality of self-giving in service, and the courage to take risks for the sake of mission – continue to burn in the hearts of all mission partners to carry forward God’s mission in this world, the mission of reconciliation that restores every person’s dignity.