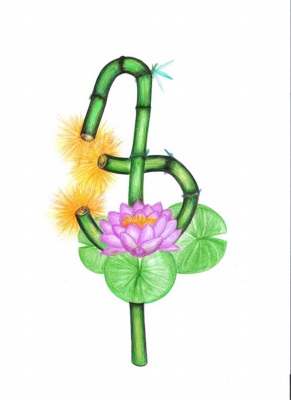 Responding to the call to risk for Mission

The Logo of the Province of Philippines-Japan

The bamboo from the Philippines symbolizes pliability, flexibility, it is sturdy, yet sways with the breeze, and serves many purposes in life;  it grows always in a cluster like a community. The lotus from Japan symbolizes spirituality, and stillness; out of the murk where it flourishes, beautiful flowers grow. Our Good Shepherd symbol is at the heart of the logo.  Please locate J(apan) and P(hilippines).  We capture our present journey of opening, receiving, giving and accompanying each other through the breaks in the bamboo.  In the background with the varied colors, we situate ourselves in the world with all the winds of change, demand, challenge which we respond to in our mission.  The crook is rooted in the love of God so that Spirit-Fired we risk for mission.  The lavender of the lotus is for women.

On October 4, 1912, the first Good Shepherd Irish missionaries, Sr Mary Alphonsus Liguori Burke, Sr Mary Cyra O’Kane and Sr Mary Clare Morissey who were then stationed in Myanmar came to the Philippines and started a new foundation in Batangas City. Since then, it has been more than a hundred years of shepherding God’s flock particularly women and children in the Philippines.

In Japan, it was on November 20, 1935, that the first Good Shepherd missionaries from Quebec, Canada came to Sendai to begin the Good Shepherd mission in Japan. They were Sr Mary Immaculate, Sr Mary Gabriel and Sr Mary Cleophas. From the year it was founded, they belonged to the Canada Province, until later becoming a Vice-Province in 1974.

During the 1990s, a glaring need for pastoral care for Filipino migrants in Japan was felt. It marked the beginning of collaboration in mission between the two countries as Filipina missionaries started coming to Japan as a response. Today, this partnership is further deepened and challenged as the two Units embarked on the journey of becoming one Province. After being a Sector of the Generalate since 2014, with Sr Elizabeth Takeda as Sector Leader, the sisters of Japan opted to be part of the nearby Philippine Province.

Called to Risk with Hope for Mission

It was during the First General Assembly of Japan as a Sector in April 2014 that the sisters voted to be part of the Philippine Province.  A letter of request was sent and later accepted.  What followed were years of hard work, meetings, communication, consultation, reflection and discernment. A Unification Team was formed:   Srs M. Tarcila Abaño and M. Lourdes Fabia from the Philippines and Srs Therese Itsuka and Joanne Isejima of Japan.  Sr M. Mercy Ang, a Filipina missionary to Japan also took on the role of translating.  There was mutual exchange of information, honest sharing of sentiments and concerns, eagerness and anxieties.

Visits were done. The Japan Sector Leadership Team came to the Philippines on May 6-11, 2015 for reflection and evaluation of the past year as a sector. Unit leadership teams met together with Sr Eliene Barros and the Unification Team. Likewise, Srs M. Regina Kuizon, Province Leader, Sr Lourdes Fabia, and Sr Amelia David, Province Treasurer also visited Japan on separate occasions.

Well aware of our painful history, of the diversity in culture and language, and of the reality of ageing and diminishment, sisters of both units embraced the challenge and responded to the call to be one, witnessing even more deeply our mission of reconciliation.

A Day of Thanksgiving and Praise

On the 24th of April 2017, on the feast of St Mary Euphrasia, simultaneous Eucharistic Celebrations in Philippines and Japan marked the establishment of the new Province of Philippines-Japan, with Sr M. Regina Kuizon as Province Leader.

Message from Sr Ellen Kelly during the Mass in Japan

‘In a world where many relationships are not developed between people of different cultures, and old wounds are passed down through generations, you were inspired by the Christ of the Gospel. You focused on love and mission!’

Sisters in Other Units 19

“Our zeal must embrace the whole world.” We felt these words of St. Mary Euphrasia coming alive on that historic day. May this be our inspiration and guide too in days to come as we continue the journey of being a presence of the Good Shepherd in our world today.