Response to young women at risk of trafficking 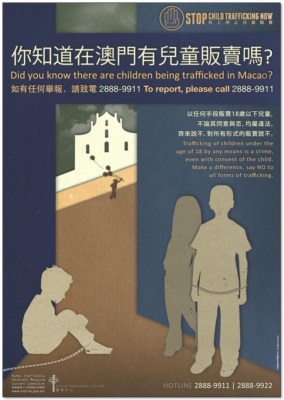 Educating the community about the risks of human Trafficking

Many young women from different provinces in mainland China travel to Macau seeking work.  While most girls insist that they are making free choices, usually they have been recruited by syndicates of traffickers.

What did the Sisters do?

In 2008, at the invitation of a representative from the US Consulate in Hong Kong, the Sisters of the Good Shepherd in Macau agreed to conduct seminars to raise awareness of the issue of trafficking of young women.  Their NGO, the Good Shepherd Centre, applied for and was given a government grant to present two seminars, one in English and one in Chinese.  These successful seminars led to a partnership with the Macau Women’s Commission, and community education opportunities developed and grew.

After the seminars the Good Shepherd Centre arranged a public exhibition, sponsored a student poster contest, and made booklets out of the posters which were sent to all secondary schools together with an MTV video on trafficking appropriate for students to view.

Also in 2008, the government passed an anti-trafficking law and set up an anti-trafficking commission.  The Good Shepherd Centre has cooperated in many ways with this commission and has continued to engage in awareness raising activities such as giving lectures to different groups and arranging bus advertisements about trafficking in children. The Centre also represented Macau in a cross strait conference organized by the Taiwan government.

At the request of the Social Welfare Department, the Good Shepherd Centre agreed to provide four permanent places in its crisis centre, which would be available 24 hours a day for under-age victims of trafficking.

Who is the major target group?

Young women and girls who arrive in Macau and are at risk of becoming trapped in the trafficking systems.

Who benefits and how do they benefit?

Some potential victims are prevented from falling into the system, as they receive information and support during the period of residence in the Sisters’ crisis center.

Professional people: academics, social workers, representatives of migrant workers, religious personnel, police, members of the law department, social welfare department and health department are informed about the issues and energized to prevent the developing of trafficking.

The whole of society benefits by the lessening of negative social impacts.

The Good Shepherd Centre in Macau.

How many people are assisted?

It is impossible to estimate how many young women and girls are deterred or prevented from being trapped in the trafficking systems because of the community awareness programmes and publicity of the issue.

With regard to the residential programme for under-age girls, more than 50 girls between the ages of 14 and 17 received hospitality between June 2012 and 2016.

The Sisters’ organization is motivated by the Good Shepherd values of compassion, respect for human dignity and active concern for each individual person.