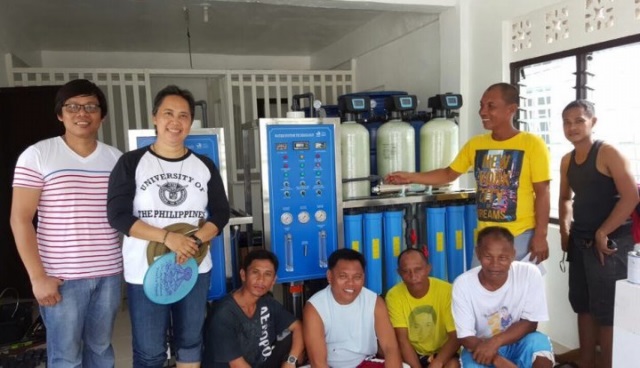 Water - the gift of life

The Philippine Province through the Ministry office continued to journey with the parishioners of San Lorenzo Ruiz Parish, Guiuan Eastern Samar, towards recovery after Super Typhoon Yolanda (Haiyan) devastated the whole stretch of Eastern Samar.

The recent project that the Province ventured into was the provision of potable drinking water to the people of Victory Island, Guiuan Eastern Samar through a water desalination system.  Victory Island is one of the island barangays under the jurisdiction of San Lorenzo Ruiz Parish. It has approximately two hundred sixteen (216) households. The island is one of the most affected during typhoon Yolanda; there were seventeen (17) deaths and one (1) missing.

Victory Island does not have its water system. They used rain water for bathing and laundry. They buy drinking water from the neighboring islands for PhP 25 per gallon. Over the years, it has been the dream of the residents to have their own drinking water system. With this situation, the province explored the possibility of providing this basic need.

In coordination with ADTEL Company, the Province was able assess the feasibility of providing drinking water through water desalination process. “Desalination is a process that removes minerals from saline water. More generally, desalination refers to the removal of salts and minerals from a target substance. Saltwater is desalinated to produce water suitable for human consumption or irrigation”. (https://en.wikipedia.org/wiki/Desalination)

The details of the project were discussed with Fr. Lenenio Garcia, Parish Priest and Barangay Council, headed by Barangay Captain Lorenzo Echavez, especially stressing the counterpart of the barangay to provide the following: (1) generator set, (2) water tank, (3) small structure for water station and (4) maintenance of the desalination machine/equipment. The province will provide the desalination machine/equipment, including the transport of the machine to the area.  After a series of negations and meetings, the preparation for project started on July 2016.

Finally, last December 14, 2016 the desalination water system was installed in Victory Island by the Engineer and technical staff of ADTEL Company and on the following day, December 15, the desalinated water was tested and proven to be potable drinking water. On December 16, Engr. Amante (from ADTEL Company) gave an orientation and short training to the persons designated by the Barangay Council to operate and maintain the machine/equipment.

The residents of Victory Island, especially Barangay Captain Echavez extend their gratitude to the Philippine Province for providing them with drinking water.

On behalf of the Province, we would like to thank all the GS networks who assisted us to make the water desalination project a REALITY.  Special thanks to the GS Lay Affiliates who helped in funding the construction of the building for the equipment and to St. Bridget School-Quezon City Parent Council for providing funds to transport the machine from Manila to Victory Island, Guiuan Eastern Samar.

GRATITUDE IS THE MEMORY OF THE HEART