A meeting with President Barack Obama 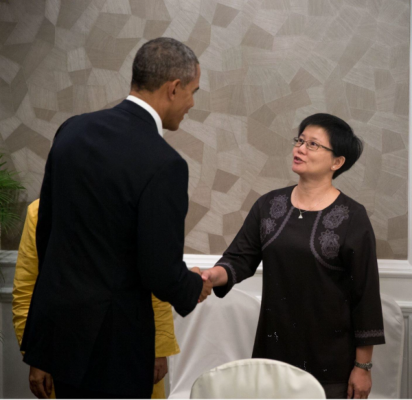 A rare opportunity for Good Shepherd

Good Shepherd Malaysia’s outreach to victims of human trafficking has brought it to the attention of the US Department of State.  When Mission Partner Theresa Symons accepted the invitation to attend a round table discussion with high level officers from the Department she had no idea she would find herself at a small meeting with President Barack Obama.

Malaysia is a destination country and to a lesser extent a source and transit country of victims of human trafficking.  The US Department of State’s Trafficking In Persons Report ranked Malaysia on the Tier 2 Watchlist from 2010 to 2013.

During the four years, as the situation of human trafficking did not improve in Malaysia, it was automatically downgraded to Tier 3 in 2014.  Malaysia was however upgraded to Tier 2 Watchlist in 2015 despite strong views from NGOs and civil society organisations that the upgrading was unwarranted as the situation of human trafficking has not improved in the country.

In response to the call of the Congregation Direction Statements, Good Shepherd Malaysia has capacity built itself to reach out to victims of human trafficking and refugees who are vulnerable to being trafficked.

In 2009, from the initial shelter provision for 13 victims of human trafficking from Myanmar, Good Shepherd Malaysia now has its own shelters for female victims of human trafficking and unaccompanied refugee minors.  It also conducts programme activities (including counselling and faith sharing for Christians) and case management support in the three government shelters for female trafficked victims in Malaysia.  Good Shepherd is the only NGO that has access to all three shelters simultaneously.  The organization also conducts prevention programs with communities on the issue of human trafficking.

The meeting with President Obama

Good Shepherd Malaysia, represented by Theresa Symons, its Executive Director, together with seven other civil society members, was invited to a roundtable discussion with Mr. Barack Obama, the President of United States of America, on Saturday, 21 November 2015.  Mr Obama was visiting Malaysia for the Asean Summit in Kuala Lumpur.

The discussion started with the President expressing his appreciation and support for the work done by civil society in Malaysia.  Obama stated that the US firmly believed that having a strong civil society was necessary to achieve more accountable governance, and that it was his country’s policy to meet leaders of such groups during his trips abroad.

Theresa shared on the topic of human trafficking in Malaysia whilst other members expressed views on their various areas of specialization in the closed door discussion.

Human trafficking is a systemic problem which requires strong political will and determination to address.  Although the Anti Trafficking In Persons and Smuggling of Persons Act was enacted in Malaysia in 2007, its implementation has been dismal.  In the proposed implementation of the Trans Pacific Partnership Agreement of which Malaysia is a party to, Theresa called on the US to balance economic gains alongside fundamental human rights of just recruitment and employment practices and fair working conditions for migrant workers including providing legal recourse for those who were exploited.

This rare opportunity to meet the President of the United States lasted an hour and 10 minutes.

Photo - Theresa is pictured in third place from President Obama on right hand side.