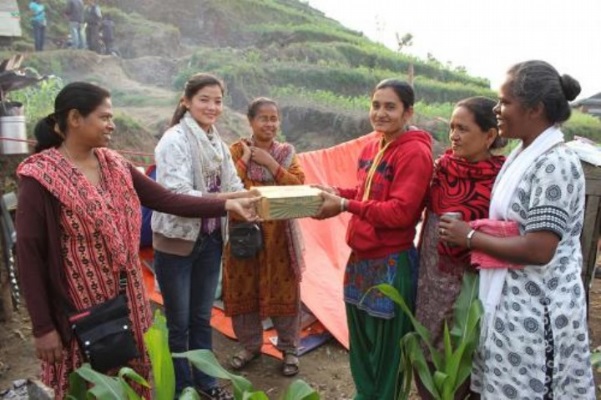 A substantial response to great need

On April 25, 2015, a few minutes before noon, a massive earthquake struck Nepal. The epicenter of the quake, which registered 7.8 on the Richter Scale, was approximately halfway between Kathmandu and the town of Pokhara in Central Nepal. Thirty-nine of Nepal’s seventy-five districts were seriously affected. The day after the quake, an aftershock registering 6.6 shook the country again. Significant tremors continue to occur repeatedly.

Infrastructure is wiped out

The quake resulted in death, destruction of infrastructures and displacement. People lost family and friends, housing and livelihood. The local government and other groups in the affected areas were unable to address the gravity of the crisis for they themselves were traumatized and rendered helpless by the extent of damage.

In collaboration with UNICEF, Caritas Nepal, other Catholic and lay NGOs and the Departments of Social Welfare, Health, and Women & Child, the Good Shepherd sisters of Nepal promptly offered relief assistance with the support of dedicated lay partners and volunteers working under the Good Shepherd banner.

In the days following the earthquake and its aftershocks, all of these teams collaborated in providing relief to the remotest villages in Nepal that were cut off from mainland and buried in rubble.

Shelter for abandoned and orphaned children

In meeting with the District Women and Children Welfare Officer, the Good Shepherd sisters’ "Opportunity Village" was registered as a foster home for abandoned and orphaned children who have been victimized due to the devastation caused by the earthquake

The rebuilding work goes on....

Thanks to grants from UNICEF, Caritas and other donations, Good Shepherd Sisters of Nepal intend to rebuild quake affected health posts in Taklung and Tanglichok VDC and to hire a program officer who will help the sisters and the people they serve in preparing a three-year Strategic Plan for reconstruction and development of the affected communities.

Click below to read a comprehensive report of activites undertaken -

Askurina shares her experiences in Nepal