Programme to raise awareness about Trafficking 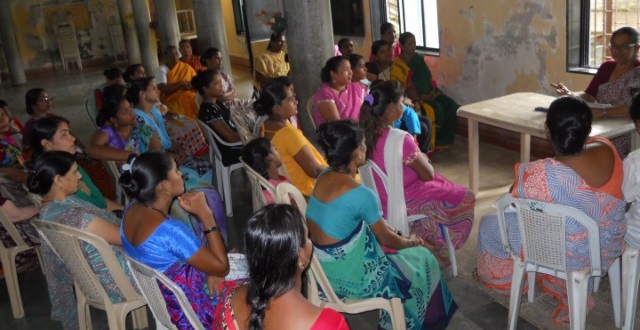 People are created to be loved.....

What is Human Trafficking?

We asked the women ‘What is human trafficking?’  Though some of them knew, yet they were silent.  Then Sr. Vandana explained to them and they listened very attentively. They responded at intervals that sometimes they see such programmes on the television and are afraid.  They try to over-protect their children.  But they are helpless; they do not want to lose their children, especially the girl child.

This is exactly what is happening; the buying and selling of human beings especially girls and women. Human trafficking is the largest organised crime after drugs and arms trade across the globe.

Close to 80% of the human trafficking across the world is done for sexual exploitation.  Girls and women are treated like a piece of property, bought by their husbands in marriage.  According to the statistics of the Government, a child goes missing in every minute, due to trafficking which takes place from neighbouring Nepal to Mumbai.  Delhi which is the capital of India has half of world’s slaves and is a hotspot for illegal trade of young girls for domestic labour, forced marriage and prostitution.  Kids are taken from their homes to work as bonded labourers by the agents who lure their parents with better education, better life and a handsome amount is given to the parents in return.   Instead, these are made to work in brick kilns, carpentry units, as domestic servants and beggars and girls for the purpose of sexual exploitation.

The women were told to use some tactics in order to come out from this situation. To start where you are, use what you have. Do what you can.

At night, we had the same session organised by Sr. Flora who is in charge of the  working girls Sarita hostel.   The hostelites depicted the theme on Anti Human Trafficking; how the girls are harassed in the urban areas especially in their place of work and also while travelling.  They acted out the different incidents that they face while working in big cities like Mumbai through group-wise role play.

Below is a short analysis of the role play:

1.  The girls go to ask for a raise in their salary.  The boss behaves very lustfully, and tries to threaten them, if they did not give in to him.  His conversation is recorded and the girls in turn say that it will be published, so that he asks pardon.   The slogan   “Woman is not weak, she has her strengths”.

2.  Rani is a young girl who was living with her parents in a small village.  Rani loved to watch television.  After coming from school, she would be glued to the television.  One day Rani’s mother scolded her.  For that Rani left home and arrived in Mumbai.  She found a friend, who gave her a job at the tea-stall.  The owner was harassing and exploiting Rani.  One day a customer witnessed the owner abusing her physically.  He called the social worker who took her away and kept her in a home.  The slogan 'Say NO to child labour' and help fight child abuse and exploitation.

One of the girls, who has a black belt in Karate, showed the different ways of defending oneself.  She said ‘We must not blame ourselves, and not be aggressive.   Seek help immediately and prevent ourselves from being harassed and bullied.’

Sr. Vandana congratulated and expressed appreciation to them for putting forward the different ways women are exploited.   She narrated to them how the Good Shepherd Sisters are preventing the future generation from this trade.

Our work at Bhiwandi Brothel, Virar/ Karjat Boardings and Anandini slum development project at Andheri, Mumbai helps in educating and giving children and girls opportunities to live a life that is worthwhile; for things do not happen, they are made to happen.   She quoted the words of a girl in prostitution.  ‘I’ve been held down like a piece of meat while monsters disguised as men abused me repeatedly.’

'It is by standing up for the rights of girls and women that we truly measure up as men.’

Submitted by Srs. Vandana and Flora