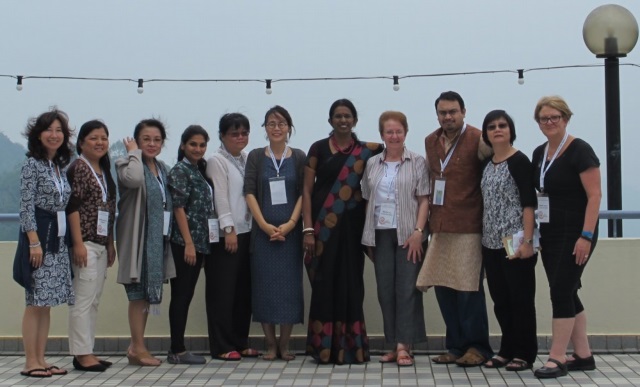 Key steps along the journey

Good Shepherd sisters are working systematically to foster and develop partnership for mission with lay people. The following is an outline of the key steps taken by mission partners (sisters and lay partners) in the development of partnership and co-responsibility for mission in the Asia Pacific Region.

The 2003 Congregational Chapter in Angers, France invited six lay partners to participate in aspects of the Chapter and to address the delegates on their experience of working with sisters in Good Shepherd mission. The lay partners were from Lebanon, Guatemala, North America, Europe, Asia and Australia/New Zealand.

This led to a new awareness, an awakening, a shift in attitude. We began to move from thinking about lay people as employees and volunteers to understanding that many of them were gifted by God with the same charism as Good Shepherd sisters.

It led us to reflect on the call to work as equals in planning/visioning for Good Shepherd mission.

The Chapter gave strong support to the call to Good Shepherd Partnership for Mission in the Congregation.

The Chapter of 2003 issued specific Statements on lay participation, with emphasis on:

Recognize that the laity who live the Good Shepherd charism are a gift for the Congregation, the Church and the world.  In partnership with them, find new paths; with reciprocal confidence find the means to share information and mutually enrich each other.

The Core Commission reminded us of the opportunity partnership provides for developing new ministries.

We have made progress in this area but feel that we need to continue to strengthen relationships and communion, ie to create networks, associations and more prophetic ministries etc.  This commitment to share our mission with the laity allows us to see a future in which the Good Shepherd charism that we share will continue to develop new forms of service.

Following the Congregational Chapter the Asia Pacific Circle meeting in Sabah, Malaysia, responded to the call of the Chapter and took the decision to plan for a Good Shepherd Partnership Gathering for sisters and lay partners in Asia Pacific.

The Provinces of Singapore/Malaysia and Australia & Aotearoa/New Zealand accepted responsibility for the planning process.

The two Province Leaders, Sr Susan Chia (Singapore/Malaysia) and Sr Pam Molony (Australia/New Zealand) undertook to guide the process. They developed Terms of Reference for the Core Planning Team and appointed a team of eight – four lay partners and four sisters – who became “The Good Shepherd Asia Pacific Partnership Team.” The role of the team was to plan the Partnership Gathering.

Sr Anne Dalton (Australia/New Zealand) was appointed as facilitator for the planning team.

The historic Gathering was held in Kuala Lumpur, Malaysia from 14th – 19th June 2008. It was attended by 72 Good Shepherd people, 30 sisters and 42 lay partners, who represented nine provinces across eighteen countries.

Recommendations from the GSAPP Gathering were supported by the InterContinental Assembly (ICA) held in Thailand in November 2008 and endorsed by the APC in December.

The APC took the decision to appoint an ongoing committee for Partnership for Mission in Asia Pacific (GSAPP Team) so that these recommendations could be achieved.

2009   A Committee for Partnership at Asia Pacific Level appointed

The Good Shepherd Asia Pacific Partnership Team was appointed in 2009 for a period of three years. This mandate was extended in 2012.

The Congregational Chapter was held in Angers, and strongly affirmed the development of Partnership for mission.

"The Laity must no longer be viewed as ‘collaborators’ but truly recognized as 'co-responsible' for the church’s being and action.”

Sisters and lay partners are co-responsible for the development of Good Shepherd mission.

2010   Workshop for Province Link persons for Partnership for Mission – Singapore

A Recommendation from the KL Gathering was that 'a Link Person for Partnership be appointed in each Province.' Communication with the Link People showed enthusiasm and passion for partnership but also raised needs, concerns and a request for support in their role.  The GSAPP

team recommendation that a Workshop be held to respond to these needs was accepted by the APC.  Thirty five participants gathered in Singapore from 12-14 August.

The purpose of this workshop was to resource Province Link People for their role, attend to the recommendations of Kuala Lumpur and strengthen partnership for mission across Asia Pacific.  A member of each Province leadership team also participated in the Workshop.

The formulating of province plans to be shared and put into action on returning home was a very positive and constructive outcome of the sessions.  The momentum flowed from the workshop into increased working together/sharing of resources across provinces and a stronger sense of identity as Asia Pacific. A number of provinces developed orientation and ongoing formation opportunities for mission partners.

A recommendation to the APC for the establishment of an Asia Pacific Office was made at this workshop. The APC authorized a committee to do a Feasibility Study and report.

Communication was maintained through a Newsletter compiled twice a year which gathered reports and information of ongoing activity in developing partnership for mission across Asia Pacific. The passion and energy in the reports showed very practical actions and positive outcomes were generated from the Link Persons Workshop held in 2010.

Reflection on the report into the call for an Asia Pacific Office led the APC to the conclusion that a lack of resources – personnel and financial – meant the establishment of a physical office was not feasible and other options would need to be considered.

The APC took the decision that the development of a Website was a better option at this point in time.  Sr Pam Molony accepted the invitation to coordinate the process from February 2013 at the conclusion of her term of office as Province Leader in Australia/Aotearoa-New Zealand.

Ten Lay Mission Partners will be participants at the 2015 Congregational Chapter, four appointed by the CLT and two chosen from each ICA.

The GSAP Partnership Team initiated and circulated a questionnaire with a focus on developing a common definition of co-responsibility for mission. Drawing on feedback from mission partners (sisters and lay partners) a statement was developed and can be seen on the Partnership section of the Asia Pacific website.

The Asia Pacific website was launched on 8 March 2014 and is an important resource for the Region.

The words of Sr Francine Muthugala, Province Leader of Sri Lanka/Pakistan at the recent launch of their new website apply well to the Good Shepherd Asia Pacific website:

'Social networking sites offer us opportunities to communicate in a speedy and efficient manner and to build inter-relationships and reach out to many more people.'

Significant developments in the growth of Partnership - Co-Responsibilty for mission include:

The major area of concern being raised with the Asia Pacific Partnership team is the need for formation and leadership development for mission partners.

There are requests for:

We need to build on the following areas.

It is paramount that discussion around formation and leadership development for mission, and the process and planning for mission partners is always inclusive of lay mission partners who have experience in this field and/or a passion for the issue. Co-responsibility for mission requires a process of inclusiveness and mutuality.

The GSAPP Team - how we work

The  team has focused on visioning and initiating opportunities to support the development of partnership and co-responsibility for mission across Asia Pacific; communicating with Province Link persons for Partnership and encouraging/enabling cross province connections for mission. This has resulted in a deeper experience of being Asia Pacific and a sharing of resources and experience in some parts of the region.

The GSAPP team makes a report and submits a strategic plan to the annual meeting of the APC.

This provides an overview of the work carried out and recommendations for future development.

The GSAPP team do not have a budget and any Conferences or Workshops held at a Regional level need to be approved by the APC who decide how the budget for the event will be provided.

Update - since this Report

Since this report was presented ten lay mission partners have attended the Asia Pacific Intercontinental Assembly held in Malaysia in October 2014 (see photo at top). Their presence made the experience of mission partners – sisters and lay partners - working together for mission a reality and highlighted the richness we bring to each other.

Click here for more information about the 2015 Congregational Chapter - http://www.goodshepherd-asiapacific.org.au/project/120

Following the Congregational Chapter 2015, the Asia Pacific Circle authorized a process to move towards the Integration of the four Teams of Asia Pacific:  Formation, Partnership for Mission, Spirituality, Justice Peace. The stage was set to reflect on the powerful Chapter Direction Statement which challenged Good Shepherd sisters and lay Mission Partners to go beyond, risk to respond to global issues, co-create and be co-responsible for the mission.

The first meeting of the GSAP Integration Committee was held in Singapore from 7-8 October 2018.