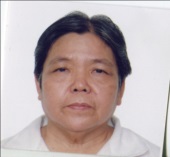 After years in exile, in 1992 Rosalie returned to Vietnam to refound Good Shepherd in her homeland. Now, the Sisters offer skills training, education in values and consciousness raising to women

I was born in CaiMon, Vietnam.  Our whole village was Catholic.  My father was an ex-seminarian, my mother was a convert from Buddhism.  One of the 118 canonised saints of Vietnam was born in our village.  Martyr St Philip Phan Van Minh was a priest who was executed by the King.  Growing up in a strongly Catholic atmosphere, I was taught to pray by my father and to totally trust in God’s providential care.  Both of my parents were very active in caring for sick and vulnerable people.  Especially during the war, refugees from neighbouring villages would find shelter in our house.  When people came to our door, begging, my mother taught us not just to give, but to give with full respect and love.  With her Buddhist background, my mother taught me to protect life, all life, even the lives of animals, insects.  This was in the midst of seeing so many soldiers and civilians killed by bombing and gunfire.  Somehow this implanted in me the need to show compassion and care.

In 1958, when the Sisters of the Good Shepherd founded their first house in Vinh Long, they set up a Vocational Center for young girls and women, with emphasis on special care for those working as sex workers. Although I was only 11 years old, I told the parish priest that I wished to join the sisters.  The priest was concerned, not only because of my age, but because he knew that my mother would not want this.  My two older brothers and a sister had joined religious life and I saw the sadness she went through at the time.  I did not dare to speak to her about this as I did not want to cause her hurt again.

Ten years later I went to high school in a bigger town near Saigon.  Many American soldiers were stationed there.  For the first time in my life I saw and understood the meaning of the term: prostitutes or sex workers. There were many snack bars, guest houses, hotels, and many young girls and women worked in them. At first, I felt angry and upset that the dignity and pride of Vietnamese women was lost.  During many restless nights the question kept coming to me: What can I do for these women?  Then I remembered the Good Shepherd Sisters and their work with these women.

One evening I met a woman – a stranger – who told me her life story.  She was living with an American man earning fast money.  She cried bitterly as she felt very ashamed of the way she earned the money. She was a widow, whose husband was killed in the war, leaving her with four children.  She had no means to care for them. She left her children with her mother and did not tell them what she was doing. Her story struck me.  She was sacrificing her life for the sake of the lives of her four children.  In our Vietnamese culture, such a woman was accused and despised.  Her story awakened in me the passion to help these women, to save them from condemned lives and to offer them a way of living life to the full, with human dignity.

Despite my sense of responsibility to my four younger siblings and the ongoing hardship of the war, I now had the strength to follow my inner calling.  I left home, to offer my life to God in the Good Shepherd convent in Vinh Long.

The journey was not easy for a 21 year old who loved to be at home and was content to be a traditional Vietnamese woman.  I was stepping out, facing loneliness, uncertainty, many unknowns ahead.  Yet, my heart was peaceful and I experienced the accompaniment of Jesus as I began my formation in Singapore.

On 30 April 1975 the communists took over South Vietnam.  They called it “Liberation Day” or “Reunification of the North and the South of Vietnam”.  I had to make a decision before the takeover - to return to my village to be with my family, or let go of the hope of seeing my loved ones again.  So now I was a stateless person, with no valid papers, no longer able to stay in Singapore.

The sisters of our Good Shepherd Province of St Louis, USA sponsored me and I went there to live.  Again I was adjusting to a new way of life, this time having to let go of familiar Asian ways.  It was the same passion and longing to serve young girls and women which sustained me. After making First Commitment on 24 April, 1976 in St Louis, I was sent to Las Vegas to work with teenagers with difficulties in their lives.  I enjoyed caring for the girls and felt happy to see them grow and learn new and positive behaviours.

Then, in 1977, another call - this time with two other companions to Hong Kong to a tougher mission, I was told.  Again, new cultures, language, new peoples, the spirit of internationality.

“I belong to all nations where there are people to be saved.”  St Mary Euphrasia

With much enthusiasm I went to language school to learn Chinese. In our history we were taught, Vietnam was governed by China for 1000 years.  The language of “enemies” was used for the Chinese.  Now I was called to love and care for the Chinese girls.  There was no room for personal like or dislike in serving God, no differentiating of the races of God’s peoples. In response to God’s love I made Final Commitment in 1982 in Hong Kong.

In 1983, for the first time in 10 years, I was able to return to Vietnam for a home visit. This reunion brought much joy and many tears.  My mother was dying of cancer of the spine and it was her last wish to see me before she died.  Three weeks after I returned home, my mother went to heaven. Before she went I was under pressure to make a decision to stay and not to leave home again.  But, during this time of grieving I did not make such a promise.  We recognized God’s provident care in special blessings for my family before my mother died.

In 1987, I went home again for a second visit. The government was more open and I was able to move around. Many roads were full of girls and women, who stood along the road with their bicycles waiting for customers. At that time, the city did not have hotels or guest houses. People told me that the men took the women to parks or any places. There was much poverty in the country, no shops or markets. People bought foods, basic needs from the government with ration cards.  The question came to me, again and again.  How can I return to Vietnam?  Show me your way….

I returned to Vietnam in 1992, after two years of preparation:  negotiations, discussions of the many pros and cons, seeking ways of overcoming many obstacles and difficulties, working through differences in thinking, in values.  Many times we thought the project would have to be abandoned.

Again God was asking me to leave familiar places to return to a new strange land - my native land which had changed so much.  Facing with tension and fears of a government communist regime.  If God wants, it will happen.

Finally, we were invited by the government to open a Vocational Training Center for poor girls, and to work with former sex workers in a government detention centre. Things went well and within nine years we were able to help almost a thousand girls and women with skills training (sewing) and help them to find a good job.  At the same time we gave adult education for those who wished. Many went on to become teachers, nurses and workers in other professions. Due to difficulties which could not be resolved, this Center closed in 2001.

The mission of Good Shepherd continues to spread in Vietnam.  In different ways and different forms it is serving God’s people who are poor, marginalized, single mothers, migrant children, their families, families suffering violence in their homes. We offer: skills training to young girls to help them to earn their living with dignity, education in human values and consciousness raising.  Also we provide hostel care for students who come from rural areas to the city to study, counselling services to individuals and families, and pastoral work in the parish.

As I look back through the journey of 24 years since the refounding of Good Shepherd Sisters in Vietnam, it seems like a long journey.  We can feel the presence of God accompanying us and working with us in our mission. We recognise the seed of Good Shepherd charism and the spirituality of St. John Eudes and St Mary Euphrasia growing and living in our hearts and in the hearts of our young sisters. We believe they carry our congregational heritage.  It will grow in their lives and pass through them to the next generation.  The story and the history of our Good Shepherd congregation are very much alive in us and in the lives of our people.

“Gratitude is the memory of the Heart.” I am so grateful for our Sisters who founded Good Shepherd in Vietnam.  They lived and worked in this war torn country, laboured and toiled to bring life to us, and gave us a Good Shepherd future.

Good Shepherd says 'No' to Trafficking in Persons

‘Must be strong to say No to the temptation of strangers.’ This phrase was repeated many times to the migrant children in Binh Hung Hoa, Vietnam on 30 July, World Day Against Human Trafficking

Responding to an urgent plea, a team from Singapore planned and implemented the installation of a fresh water system in a Good Shepherd School in Ho Chi Minh city

School for children of migrants in Vietnam

In Ho Chi Minh City, the Sisters conduct a school for children who live with daunting and complex challenges. The resilience of the children is amazing

Fruit and Vegetable Orchard in Vietnam

The Sisters are establishing a fruit and vegetable orchard to educate young people in ecology, to teach them agricultural skills and life skills