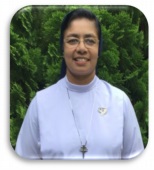 Maryanne is the Province Leader of Sri Lanka/Pakistan

Sr. Maryanne Perera was elected Province Leader of Sri Lanka/Pakistan on 20th November 2019 at the Province Chapter held from 12th to 22nd November in Sri Lanka.

She holds Bachelor’s Degrees in Theological Studies and in Arts. Also, she carries a Certificate of Recognition from the Institute of Spiritual Formation of Asia on Formative Spirituality: Theology of the Psychology of Religious Life and on Scripture Studies. Further, she has wide international training on leadership formation and skilled facilitation.

Her apostolate, in addition to teaching, has been: Vocation/Mission Promotion, pastoral work, child development, care of single mothers, elders and girls working in Free Trade Zone. Her services to the Province have been in various capacities: Directress of Temporary Professed Sisters, Province Secretary to two Province Leaders and presently Directress of Continuing Formation in Sri Lanka and is responsible for the Spirituality Centre: “Serene Pastures”.

Maryanne is gifted with creativity, artistic talent and is solid in spirituality and organisational skills.

Support for survivors of bombings, in Sri Lanka

Celebrations of the founding of Good Shepherd sisters in Sri Lanka, 1869-2019, were enjoyed in local community settings by sisters, mission partners and supporters