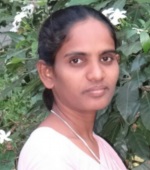 The sisters and Mission Partners of Central East India/Nepal mourn the untimely death of Sr Nirmala on 8th December 2018. Read their heartfelt tribute to her

The song is ended, but the melody lingers on….

In the words of Irving Berlin, we place a few words of tribute to our dear Sr. Nirmala Anthonisami.

Nirmala was born on 15 June 1987 to devoted Catholic parents Mr. Anthonisamy and Mrs. Francisca Mary as the third Child belonging to the Archdiocese of Pondicherry, in a village called Rayapuram. She was blessed with two elder sisters and two younger brothers. She began her primary education (1-5) at her village, and completed her Higher Secondary School studies at Thirukoviloor, Villupuram Dt.

The spark of love for God and devotion to Mary began at early years of Nirmala; she involved herself with interest in the Church activities while studying in class four. She served lovingly during the Holy Eucharist and then became the member of the Legion of Mary and by being involved in various parish activities she came close to God.

As she heard the call of Jesus the Good Shepherd, she responded to it in the year 2004, entered Good Shepherd convent, Bangalore and continued her formation. She made her first commitment on 14 May 2009.

After her First Profession she served in our communities at Mangalagri, Pallavaram, and Mulakalapalli where she reached out to young girls, women and children. In Pallavaram, Chennai she pursued her professional studies (B. Com) and won a gold medal in the Vel’s University .She was a very intelligent and capable person full of potentials.

In 2016 she went to Nunkhai (Thailand) for Internationality experience. In preparation for the Perpetual Profession along with her companion Hemalatha Boddu went to Chandigarh for two months preparation under the guidance of Bro. Philip Pinto and team. On 10 December 2016 she gave her total “Yes” to Jesus the Good Shepherd.

The last two years she served the young girls and children at Salem in Tamil Nadu as the Directress of Chalice program. At this prime of her life she was diagnosed with pulmonary tuberculosis and later diagnosed with interstitial lung disease. She suffered much and was on the ventilator for 27 days. She had a great desire to live but the Shepherd God tenderly carried her Home on 8 December 2018 on the feast day of Immaculate Conception that was Nirmala’s feast too.

We often say that the hour of death cannot be foretold. When we say this we imagine this hour would be in a distant future, we never thought we would be thinking about Nirmala as a memory. Yes, it came a little soon, too young to be born in heaven still feels a bit unreal and it will take time for us to realise that she is no more with us.

We all have different memories of Nirmala but one thing common and inspiring is the way she loved and lived for the Good Shepherd Mission. Whoever came into contact with her experienced her welcoming smile, tenacity, amazing courage, strength, determination and sense of humour which we will always carry with us.

We miss you dear Nirmala, but we look at the sky and see that shining star

smiling brightly and passing the message of God’s peace and love to each one of us.

Intercede for us until we join you there.