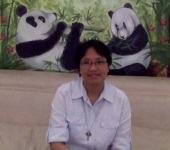 Endah has been involved in many ministries in Indonesia. Now she is link person for communication and coordinator of the Formation Team in her province and a member of the Asia Pacific Formation Core Team

I was born as the youngest in the famiy on April 12, 1974. My mother was working in the hospital run by Franciscan Sisters. Since my school was near the hospital where my mother worked, sometimes after school she brought me to the hospital. She introduced me to the sisters who worked with her.  I liked to play with the sisters because after that they would give me candies or biscuits. The image of ‘Good Sister’ remained in my mind until I grew up. As a youth I was involved in the Parish’s activites. After starting work I joined a group of volunteers with the Diocesan seminary.  Every weekend we would go to rural areas to conduct some activities for the children.

My first profession was on September 15, 2008. As a newly professed sister I was in charge in a boarding facility for girls in Jakarta. It was a moment where I really experienced how Jesus taught me to have a shepherd heart in accompanying the girls.  I have been in charge also in school as a counselor and in the shelter for unplanned pregnancy. I made my final vows on November 21, 2015 and soon after that I received a new mission as vocation mission promotion coordinator in the province. I am also responsible as link person for communication for Indonesia Province. Since I became a member of the Asia Pacific Formation Core Team on last October 2017, I also  become a coordinator of Formation Team in the Province. Another mission entrusted to me is accompanying a group of single mothers in the Jakarta Diocese.

Because my responsibilities in the mission are mainly at the province level, it is a challenge for me to have a broader perspective and to be open minded. To be able also to work as a team, to develop a network and  to animate communities in promoting our charism to attract people especially the youth to our mission. It’s such a big mission for me but I believe that God’s grace is enough for me to do his mission.

The words that struck me when I came to Good Shepherd convent for the first time are still the source of my inspiration.  My life is for the glory of God and salvation of souls...and may it be done according to God’s will.

Reaching out to the people of Palu

In September a tsunami was triggered by a powerful earthquake which hit the Indonesian city of Palu on Sulawesi Island. A Good Shepherd group travelled to Palu to offer support to the work of aid organisations

Visioning Integration for Mission, in Indonesia

Members of the Asia Pacific Formation and Partnership Teams, and the Integration Working Group held meetings in Nayakakanda in January 2018