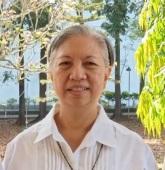 Susan is the Province Leader of Philippines/Japan

Susan Montano was elected Province Leader of the Province of Philippines/Japan on 18th March, 2020, during the Province Chapter held in Quezon City, Philippines, March 16 to 21, 2020. Her mandate will begin on June 29, 2020.

Having obtained a Bachelor’s Degree in Business Administration, with a major in Accounting, Susan has had varied experiences in working with big corporations for ten years before joining the Congregation. She received training in Spirituality and Formation work, and held positions as Vocation Promoter, and Pre-novitiate and Novitiate Directress. As a member of the Province Leadership Team, she was the Councilor in charge of Formation. She was also a member of the Core Team of the Asia- Pacific Formators.

As Local Leader, she was privileged to journey with distressed young women who sought refuge and healing in Heart of Mary Villa, a home for single mothers. Susan was Program Coordinator of Damayan Community Center, an outreach program of Heart of Mary Villa, which responded to the needs of the urban poor of Malabon, providing educational assistance to poor, talented youth and livelihood programs for the families.

The Philippines-Japan Province Chapter was held from 16-22 March 2020 in Quezon City. The Chapter was impacted by both the Taal Volcano eruption in January and now the COVID-19 pandemic

On April 24, 2017 feast of St. Mary Euphrasia, the Province of Philippines-Japan was established. This is the culmination of some years of discernment, reflection and discussion between the two countries.