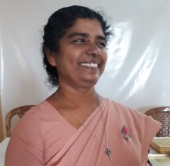 Pushpa is the Province Leader of Central East India/Nepal

Sr. Pushpa Louis was elected Province Leader of the Province of Central East India/Nepal on 21st November, 2019, during the Province Chapter which was held at the Provincialate in Nagpur, Maharashtra, India from 16th to 23rd November, 2019. Her mandate began on 5th January, 2020.

Pushpa was born in Kadiapatnam,Tamil Nadu in 1966 and entered the Congregation in Bangalore, in 1985. She made her perpetual profession in 1993. Pushpa obtained a Certificate in Social Work, a Bachelor’s degree in 1998, Master’s Degree in Sociology in 2001 and a Law Degree in 2008. Pushpa has a long history of social work having worked in the rural area with the aboriginal people for 12 years. In Maharashtra she helped in developing the ministry with women involved in prostitution. She is very committed to Social and Economic Justice and passionate in promoting Partnership. She has held leadership positions as Local Leader and was on the previous Province Leadership Team. She also served on the Preparation Committee for the 2014 Inter-Continental Assembly.

Share the joy of Neuvillites Day (Celebrating Mission Partners) held on 4 September 2021, when every sister and partner-in-mission renewed their commitment for mission

2021 World Day Against Trafficking in Persons

On 30 and 31 July 2021, Good Shepherd Sisters and Mission Partners conducted public meetings to highlight this vital issue and share important and practical information with the general public

A Call to Rejuvenate

The sisters in India hold an Annual Gathering of sisters in temporary profession, with participants from both provinces. This year, due to the pandemic, the sisters from SW India could not travel and they were greatly missed.....

Responding to impact of COVID-19

In many countries of Asia Pacific, Good Shepherd teams and projects are reaching out to people most affected by COVID-19 virus. GS in Central East India describes their extensive work

Learning the Art of Skilled Facilitation

16 participants from many provinces of Asia Pacific responded to the call to learn the skills of facilitation at a workshop held in Ipoh, Malaysia from 31 March to 8 April

In Nagpur India, Sisters from two provinces gather to lay the foundation stone for the Provincialate building, and to bury a time capsule