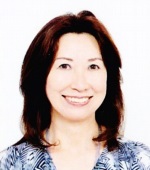 Susanna works with the Sisters in Japan as translator - at national and regional levels. She has attended many regional meetings including in Singapore, Nepal, South Korea and Malaysia

'I need someone to help me with English!'

I’m Susanna Kay Kanayama, a partner of Good Shepherd. You may not know there are lay Mission Partners in Japan as we are small in number.  Indeed, the number of Sisters is not large either. I’m rather a new face as a partner.  Almost 10 years ago I became associated with Good Shepherd just when Sister Regina Munemoto became the Province Leader of Japan.

Long before that time, my family－my husband, three children and I－had opportunities to attend Masses which were held at the Good Shepherd Convent every Sunday.  It was a rare event for us, lay persons, to be in the convent and come to know sisters with grace, dignity and hospitality. Just then, sisters asked some of the lay persons including me to be Saturday School teachers for elementary school kids and some graduates of Kasugaso Good Shepherd Kindergarten at the classrooms of the kindergarten. As my children were the ages of Saturday School, I was willing to work with the sisters and also I thought it would bring good results for our own religious life.

But at that time I could not imagine it as a thread which led me to Good Shepherd partnership for Mission.  As I was an English teacher, I taught the children not only the Bible stories but I also taught them English. The reason was that the sisters thought more children would come if they could learn English free.  And that was a hit.  At the most we had around 80 children to attend Saturday School. The school lasted several years sending out many graduates.

After a couple of decades, again the sisters asked me to work for Good Shepherd. As I was teaching full-time at the university, I told them I had little time to serve. But the situation was really more urgent than I thought. Sister Regina, the Province Leader at that time, had to struggle with English materials day and night. “I’m scared to open my computer with lots of English e-mails. I need someone to help me with English!” she said.

That was the start of my partnership. Without knowing the mission, the activities nor the full meaning of partnership I became one of the Good Shepherd Mission Partners, mostly translating English material to Japanese and Japanese to English.   I was invited to attend some Good Shepherd regional meetings which meant that I met many more sisters and lay mission partners:

I was also a participant in the Asia Pacific Intercontinental Assembly held in Kuala Lumpur Malaysia in October 2014.  I attended the assembly, not as translator but as a representative from Japan.

By and by I came to realize I had totally wrong thinking about the way of living.  I used to think: “The world of sisters is different from our world. We/I don’t need to do as much as they do. We are busy enough just living our daily life. The mission is for them and not for us. We are ordinary people.”

Now the partnership opens my mind to the new life. Although what I am doing is very small, I’m trying to look at the different dimension of my journey.  I am seeking my mission to the world of peace and love.

Thank you, Sisters of the Good Shepherd!