The ministry of Sr Gerard Fernandez, in Singapore 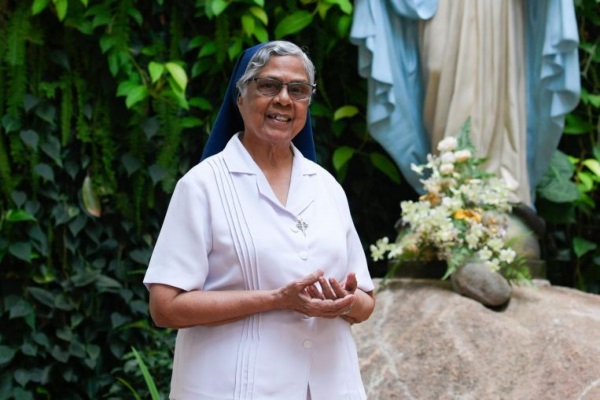 A rich and poignant story

For more than 35 years, Sister Gerard Fernandez visited people in prison in Singapore's Changi Prison.  She felt a particular call to the ministry of compassion towards women and men facing the death penalty.  Now her story has been captured and depicted in a film 'Sister' by Chai Yee Whei.  It was made for the 15 Shorts project, a biographical series about 15 Singaporeans who have gone to extraordinary lengths to help others.

Click to watch the film at www.15shorts.com . The film is dedicated to 70x7, an initiative within Prison Fellowship Singapore that promotes restorative justice.

SINGAPORE - A painful moment comes midway through Chai Yee Wei's short film ‘Sister’ when the sister of a murder victim confronts the nun who has been counselling the murderer's accomplice.

"Why do you have to do this? Why do you have to counsel someone who has done so much evil?" Margaret Ng, then in her late teens, asks Sister Gerard Fernandez in an agonised and impassioned plea.  "How could you help them?" she wails.

Her sister, Agnes, was only nine when she and another child, 10-year-old Ghazali Marzuki, were murdered in a ritual killing in a Toa Payoh flat in 1981. Temple medium Adrian Lim and his two "holy wives", Catherine Tan Mui Choo and Hoe Kah Hong, were sentenced to death for the killings. Their lurid story of sex, superstition and murder gripped the nation for years.

But it is the story of the nun who took pity on the women and met them every week for seven years, who walked with them on their final journey to the gallows in 1988, that Mr Chai chooses to tell in his film.  It was made for the 15 Shorts project, a biographical series about 15 Singaporeans who have gone to extraordinary lengths to help others. It is put together by the non-profit National Volunteer and Philanthropy Centre (NVPC), local film company Blue3Asia and 15 Singaporean film-makers.

Instead of defending herself to Margaret in that moment, Sister Gerard kept silent. Words were not needed, she told The Straits Times in an exclusive interview before the public release of the film. Instead, she shared in the young woman's pain by looking her in the eyes and hugging her.

The stigma and intense emotions that surround death row counselling are also poignantly portrayed in ‘Sister’.  A pioneer in death row counselling, Sister Gerard, 80, co-founded the Roman Catholic Prison Ministry in 1977.  By releasing new details about the women's incarceration, the film adds an extra dimension to the public understanding of the high-profile case and the little-known realm of death row counselling.

Apart from showing the confrontation between Ms Ng and Sister Gerard, the film also reveals the two women were able to put on blue satin dresses with sashes and white shoes before they were hanged.  Back then, it was standard protocol for death row prisoners to be hanged in their prison garb of beige clothes and slippers. But Sister Gerard wanted dignity for the women in their deaths and managed to persuade the prison authorities to allow the dresses to be worn.

When they were told only three days before their sentences were carried out on Friday, November 25, 1988, Sister Gerard rushed another nun to stitch the dresses in record time.  "They asked me as they wore their dresses, 'How do I look?' They were appreciating themselves, after having repented and forgiven themselves for what they had done. I was touched by the change and transformation I saw in them," said Sister Gerard.

The film shows how she placed rosaries in their hands and sang the hymn "How Great Thou Art" with them as the two women walked down the corridor to the gallows. Tan had returned to her childhood faith of Catholicism in prison, and Hoe also eventually asked to be baptised a Catholic.

Outside the gallows chamber, Sister Gerard heard the lever to the trapdoor being pulled as she continued to sing.