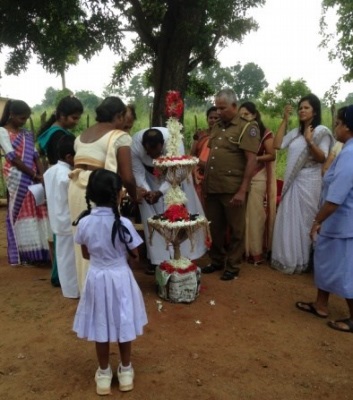 The Good Shepherd Sisters visited a village called Gajabapura,a rural village with a Sinhala Minority Community in the Welioya Division in Mullaitivu District. These people were victims of the earlier war and were forced to move from this village to refugee camps. The M/Paranagama Wewa School of the area was also destroyed during this war in 1999 and was reopened on 26th February 2015.

The present living conditions of these people who are under the poverty line is very difficult, with neither proper housing nor sanitary facilities. Electricity supply is very limited and the children who are undernourished with barely one good meal a day are sent to school under dire conditions. As a result they need to be encouraged and supported emotionally, socially and economically.

We had a workshop for parents of children at the school – M/ParanagamaWewa School on 30th January 2016. It was organized by Sr. Lakshmi and a group of teachers from Colombo.

Now we are engaged in a Nutritional Program, and also visit this area creating a child friendly safe space for the children through various activities.