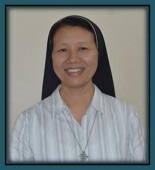 Regina is the Province Leader of East Asia

Sister Regina Htoo Htoo was elected as the new province leader of the East Asia Province at the Province Chapter held 23 April – 10 May 2014.

Regina made her perpetual profession on 21st February 1999. She is a Myanmar citizen, and holds a Bachelor of Science in Mathematics and a Diploma in Religious Formation.  Regina is a graduate of the Myanmar Institute of Formation for Formators (MIFF) and has been working as a counsellor, spiritual director and teacher, giving courses on Human Development.

Her ministry experiences include: pastoral ministry, residential care of single mothers and their children, Caritas Social Services programs and networking with NGOs for community development, HIV/AIDS prevention programs, Child Development and Empowerment programs, and Vocational training for women and girls in crisis situations.

Previously, Regina served as local community leader and sector councillor in Myanmar, a sector of the Province of East Asia.

East Asia Province held its Pre-Chapter gathering in Myanmar from 8 – 13 December 2019 with the theme “Integrated Life, Drawn by Love, Passionate for Justice”

Session for Partners-in-Mission, in Myanmar

Empowerment Program for Good Shepherd Partners-in-Mission was conducted from 12 to 18 October 2019 in Loikaw, Kayah State. The theme of the session: 'JUST LOVE'

Sharing Hopes for the Future....

The youngest generation of the Good Shepherd Sisters in Myanmar participated in an annual session in Loikaw, Kayah State from 1-30 September, 2019

Breaking Bread in the Streets

The sisters in Myanmar have been reaching out to groups of children living on the streets, and building relationship with them. Some respond to opportunities offered and others, for now, continue their vulnerable life style

Good Shepherd says 'No' to Trafficking in Persons

‘Must be strong to say No to the temptation of strangers.’ This phrase was repeated many times to the migrant children in Binh Hung Hoa, Vietnam on 30 July, World Day Against Human Trafficking

The Art of Skilled Facilitation

Good Shepherd Nongkhai hosted meals for participants at their social microenterprise restaurant, as well as organizing the central feature of the program which attracted almost 2,000 people

The nine Province Leaders of Asia Pacific met in Ipoh, Malaysia for their annual meeting, joined by two sisters from the Congregational Leadership Team

In Myanmar, Good Shepherd sisters joined other religious Leaders and people living with HIV/AIDS and their families in an act of solidarity and remembrance

Responding to an urgent plea, a team from Singapore planned and implemented the installation of a fresh water system in a Good Shepherd School in Ho Chi Minh city

Learning the Art of Skilled Facilitation

16 participants from many provinces of Asia Pacific responded to the call to learn the skills of facilitation at a workshop held in Ipoh, Malaysia from 31 March to 8 April

Garden of Friendship in Nongkhai, Thailand

The Garden of Friendship has flourished from former rice fields to a thriving and multi-faceted support service for people in need of health care. Now it has a fine new facility

Fountain of Life Center in Cambodia

School for children of migrants in Vietnam

In Ho Chi Minh City, the Sisters conduct a school for children who live with daunting and complex challenges. The resilience of the children is amazing

In 1866 St Mary Euphrasia sent sisters to Myanmar to begin a Good Shepherd foundation. A year of preparation culminates in celebrations to mark this happy occasion

A former Good Shepherd lay Mission Partner from Sydney tells the story of her family holiday in Thailand. She meets up with Sister Lakana and is inspired by this project in Phuket

Story of Good Shepherd Beyond Borders

School based Protection Centre in Thailand

In Bangkok, the Sisters engage with local schools, the private sector and local NGOs to protect migrant children from neglect, abuse and exploitation

In Chiang Mai Thailand, Wildflower Home offers education, health and empowerment opportunities to young women. A farm on the property provides a sustainable yield for the home's meals

Fruit and Vegetable Orchard in Vietnam

The Sisters are establishing a fruit and vegetable orchard to educate young people in ecology, to teach them agricultural skills and life skills

Children aged from 3 - 14 are offered extensive and holistic programmes. These include education, health, life skills, counselling, even a Credit Union.