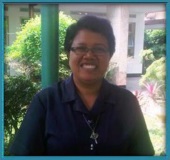 Chatarina is the Province Leader of Indonesia

Sister Chatarina was elected as Province Leader of Indonesia at the Province Chapter held from 1st to 7th March 2014.

Chatarina made her perpetual profession on 8th September 2001. She has then followed professional studies in counselling.

She has experience in a wide range of ministries, including work with young girls, single mothers, and in various services to women and children. In more recent years, she has worked in the ministry of anti-trafficking and on the issues of violence against women and children.

The GSAP Integration Committee describes its meeting in Kuala Lumpur from 12-16 July in ways which are inspirational and practical, and they invite us all to seize the moment. Carpe Diem!

Showcasing the creative work of women

In Flores, Indonesia the sisters work with women who are migrants or at risk of being trafficked. In Indonesia Fashion Week, their handwoven fabrics based on traditional designs were incorporated into the production of high quality fashion

The GSAPIC met in Singapore from 15-17 March 2019. This brief description gives a flavour of their work, and more information will be available after their plans are considered by the APC in April

'Raise Your Voice' Conference, in Indonesia

Two Good Shepherd sisters joined Emergency Response Teams in tsunami affected areas in late December and early January. Their work was supported by funding from other provinces. This is their story....

Reaching out to the people of Palu

In September a tsunami was triggered by a powerful earthquake which hit the Indonesian city of Palu on Sulawesi Island. A Good Shepherd group travelled to Palu to offer support to the work of aid organisations

Visioning Integration for Mission, in Indonesia

The nine Province Leaders of Asia Pacific met in Ipoh, Malaysia for their annual meeting, joined by two sisters from the Congregational Leadership Team

The story of cross border sharing of resources, province discernment, strategic planning and willingness to risk for the sake of Mission

Partnership for Mission session in Indonesia

Theresa Symons leads a session for 44 Mission Partners - sisters and lay - in Cisarua, Bogor on 25-26 February 2016

Karya Tasih was set up by the sisters in1988 in Jogjakarta Indonesia to provide safe shelter for single mothers and their babies, who need support.

Life is a struggle for the people who come from other islands of Indonesia to work in the palm oil plantation and mines. Three Sisters tell their individual ministry stories